"If I could design a Stage myself that would have been it!" was race winner Lizzie Armitstead's verdict on the Aviva Women's Tour of Britain leg that took in the glorious Derbyshire Dales.

The World Road Race Champion took the yellow jersey ahead of multiple World and Olympic Champion Marianne Vos, who finished in fifth place in what is undountedly the toughest stage of the Tour.

Although she wasn't in the initial break when it went away, it was Armitstead who bridged the gap to cross the finish line ahead of the rest in Chesterfield. Watch out for the TV highlights on ITV 4 tonight at 11pm.

Local schools joined clubs and groups to cheer on the riders as they whizzed through the Dales during the late morning and early afternoon of Friday.

Stage 3 officially started at 10.45am in Ashbourne Market Place, where one of the recipients of our £100 community grants, Ashbourne Fairtrade Town Initiative, mingled with the crowds giving out free bananas, stickers and information encouraging local people to choose healthy snacks when cycling. 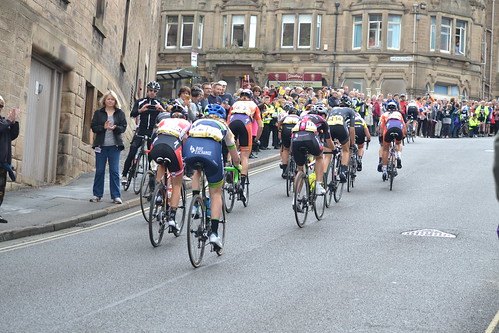 The race proper started on the A515 by Tissington Gates before taking a left towards Heathcote, Crowdecote and Earl Sterndale on their way to Buxton town centre for the first sprint section of the day along Terrace Road.

The the peloton then headed back south, skirting the communities of King Sterndale, Chelmorton and Flagg before hitting the village of Monyash, then taking the Long Rake road towards Youlgrave and down through Alport to the first Queen of the Mountains section passing by local landmark Robin Hood's Stride.

Then it was full speed again into Winster, Wensley, Cross Green and Darley Bridge before the second sprint section of the day on the A6 at Darley Dale.

Just before 1pm the peloton sped into Matlock town centre to tackle the second Queen of the Mountains challenge - Matlock's tortuous Bank Road - cheered on by a terrific crowd in Crown Square and on the hill itself.

The riders then headed out on the Chesterfield road to the top of Slack Hill into Wirestone Lane and Screetham Lane towards Beeley Moor. Then it was down the fast descent from the top of the moor, winding down into Beeley village, on to Chatsworth and Edensor before leaving the Derbyshire Dales at Baslow.

See our video clips of today's Stage filmed from the Tissington Trail bridge near Biggin and in Matlock Town Centre: