Our 121st Matlock Bath Illuminations burst into life at the weekend with fireworks and rave reviews for the famous parade of decorated boats.

The unique parade took to the river for the first time in 2018 and will be the centrepiece of the Illuminations entertainment organised by your District Council every weekend until 28 October.

After a lights switch-on performed by the Chairman of the District of the Derbyshire Dales, Councillor Jean Monks, more than 1,000 first night visitors cast their votes for their favourite of the 10 boats on show.

First prize, taking almost half of the total vote, went to ‘Herbie the VW Beetle’, winning for its designers Richard Wood and Angela Flavell of Chesterfield the Arkwright Cup, donated in 1903 by Sir Richard Arkwright, and the Centenary Cup, plus a cash prize of £400.

In second place was ‘Thomas the Tank Engine’ by Paul Henshall, of Matlock, helped by Harry Davidson, winning the Plumtree Cup and £380. Paul was competing for a 44th year.

Third prize for ‘Dambusters on the Derwent’ went to Cromford’s Ian Page, competing for a 31st year. He won the Sheffield Wire Rope Cup and £360, followed in fourth place by ‘Frankenstein Returns’ by Matlock’s David Gregory, competing for a 48th consecutive year. He took home the Dave Sanderson Trophy and £340.

The winners were announced before the boats paraded on Sunday, with awards presented by Jacquie Stevens, who is assisting husband Geoff Stevens MBE, compering the event for a 51st year. Geoff’s own Compere’s Prize, the Bill Beresford Memorial Shield, went to Michael Hall of Ashbourne’s ‘Red Arrows’ model.

“I seem to say it every year, but the boats are absolutely brilliant and really do get better and better. In my view the 2018 parade has to be the best ever and is a credit to the Matlock Bath Venetian Boat Builders' Association.”

The traditional candle boat, which goes out before the main parade and is constructed by all the boat builders to show how the models used to look a century ago, is ‘Hands Full of Love’ – inspired by Year 7 students at Matlock’s Highfields School. It is lit with more than 100 night lights.

Saturday’s opening night also included a thrilling fire and glow show and a fireworks finale – there are fireworks every Saturday during the 2018 season, plus the last night on Sunday 28 October, sponsored by the Heights of Abraham attraction in Matlock Bath.

The unique parade of illuminated boats happens twice on Saturdays at 7.45pm and 9.15pm and at around 7.30pm on Sundays.

This year adults pay £6 on Saturdays and £5 on Sundays if they buy online in advance - £1.50 cheaper than on-the-night tickets. Accompanied under 16s continue to be free, with concessions available for OAPs and disabled visitors. 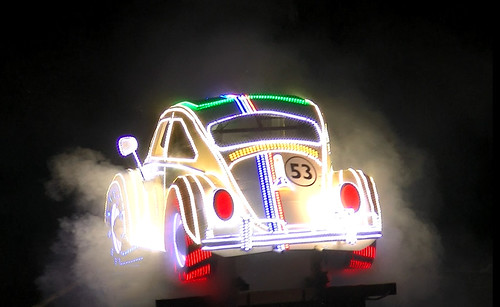