This year's festival - the 119th - burst into life on Saturday (10 September) and will run every weekend until 29 October in the District Council's picturesque Derwent Gardens, with a fireworks finale on every remaining Saturday.

And 16-year-old Isabel’s ‘Tallulah Daisy – Camper Van Crazy’ earned the Matlock Bath boat builder first prize in the boats competition and the Arkwright Cup, donated in 1903 by Sir Richard Arkwright, the Centenary Cup, plus a cash prize of £270.

Competing for the third year, Isabel is the youngest member of the Matlock Bath Venetian Boat Builders’ Association, and her hippy VW camper van model can be seen every weekend, along with nine others, in the unique parade of decorated boats that are rowed up and down the River Derwent during the Illuminations.

Second prize went to Christine Dence, Richard Wood and Pete Hartshorn (The Motley Bunch) with their entry Hogwarts Express, the famous train from the Harry Potter stories. They won the Plumtree Cup and £235.

In third place was ‘Pete’s Dragon’, designed by last year’s winner Ian Page, of Cromford. He was presented with the Sheffield Wire Rope Cup and £205. In fourth place was 'Ship in a Bottle’, designed by Michael Hall, of Ashbourne, who took home the Dave Sanderson Trophy and £170.

Judges were selected at random from the opening night crowds and it's a friendly competition, with all non-prize winners receiving £165.

The traditional candle boat, which heads the parade and is constructed by all the boat builders to show how the models used to look a century ago, is ‘Floating in a most peculiar way’ – a tribute to David Bowie, inspired by students at Matlock’s Highfields School. It is lit with 85 night lights.

The boat judges were Angela and Michael Moran from Beith, North Ayreshire, Paul and Julie Bullas and their daughter Lily Mae from Stockport, and Craig Hatton and Jessica Jackson from Chesterfield.

The lights switch on was performed by Chairman of the District of the Derbyshire Dales Councillor Tom Donnelly, assisted by his grandchildren Luca and Corey and other youngsters from the first night crowd.

Councillor Donnelly, who also presented the awards at the end of the night, said:

“There is general agreement that the decorated boats are better than ever this year – and there was a real buzz of appreciation in the crowd when the boat builders switched on their lights for the first time. The boats are simply stunning.

“There’s no doubt that the Illuminations are a unique family experience and we as a District Council are proud to stage the region’s biggest autumn attraction, which we hope once again brings in 100,000 people to Matlock Bath to boost tourism, trade and jobs locally.”

The parade of illuminated boats takes place from 7.45pm every Saturday and Sunday evening until 29 October (7.30 on October Sundays) and can be viewed from Derwent Gardens. The Gardens and nearby Lovers’ Walks are also bedecked with colourful lights. 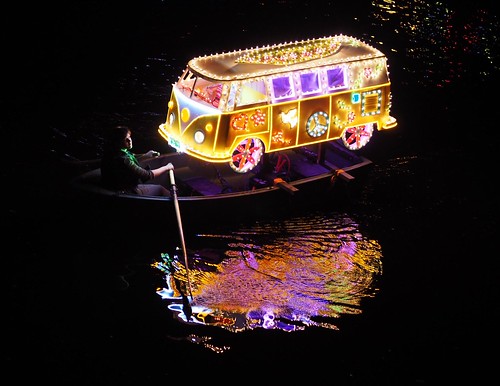